Eden Arts has initiated and supported a number of local projects over the years.

In April 2014, Eden Arts was proud to support senior Mt Eden artist Stanley Palmer in a visit to the Gallipoli Peninsular as part of an Australasian Artist Project.  Work made from this visit will form part of a World War I commemorative exhibition entitled "Your Friend the Enemy".  With the 2015 centenary of the Gallipoli campaign this project is of great national, historical and artistic significance.

Stanley Palmer lives and works in Mt Eden and is a long-time generous supporter of Eden Arts. He has a unique personal involvement in the telling of the ANZAC story, as both his father and his uncle fought there and the Palmer family home was the meeting place for the Gallipoli Club during his childhood.

Stanley shared his personal stories of Gallipoli, showing family photos and memorabilia as well as art he has made as a result of this legacy, in a talk organised by Eden Arts at the Mt Eden Village Centre in June 2014. 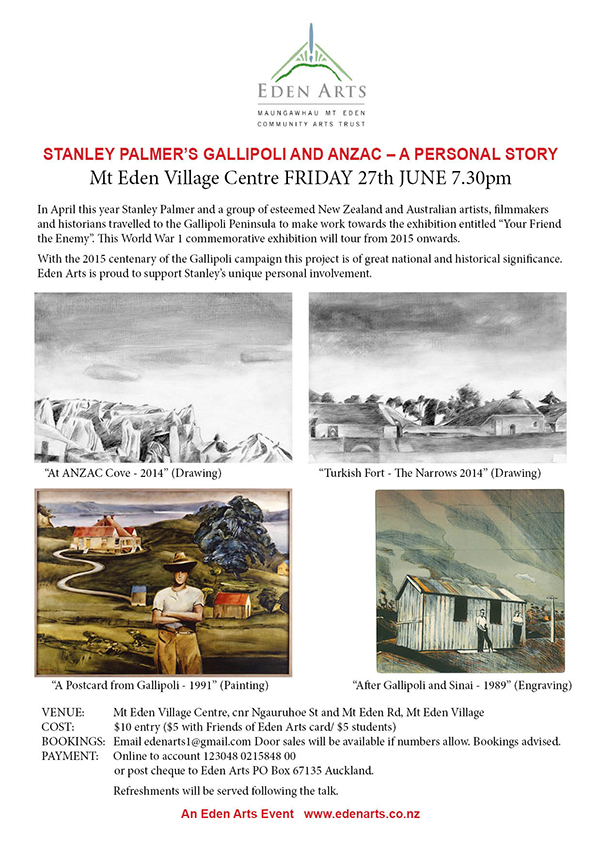 The colourful mural on the side of the Frasers cafe building was first painted around 30 years ago by local artist Claudia Pond Eyley. It was commissioned by the then Borough Council and upgraded some 10 years later with assistance from the Maungawhau Mt Eden Community Arts Trust (Eden Arts). Claudia has been seen on many occasions over the years on her ladder working on this mural at the corner of Mt Eden Rd and Stokes Rd, repairing weather-damaged paintwork or areas of graffiti. In mid 2014 Eden Arts again made a donation to Claudia to assist towards the upkeep of this iconic piece of public art in the heart of Mt Eden.

Claudia is a Mt Eden artist who has been a loyal supporter of Artists in Eden Day and other Eden Arts projects over many years. 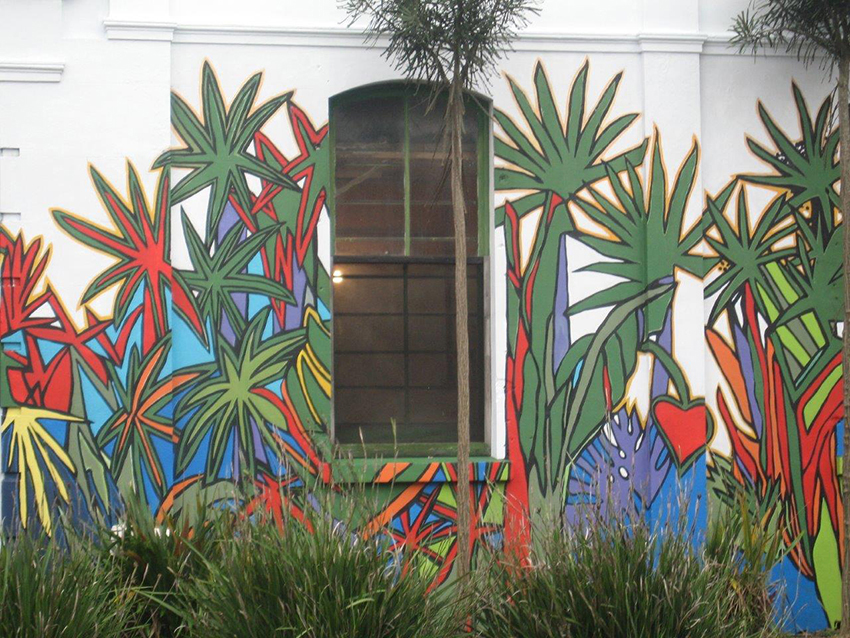 Tahuri was from Waikato and married into the Waiohua people of Tamaki. Her home was on Maunga Kiekie. Tahuri had green fingers and became legendary for her kumara gardens that stretched from Maungakiekie to Remuera. Several species of kumara were brought to Tamaki on the Aotea waka and Tainui waka. Prior to this, the fern root was the staple diet, a harsh and highly carcinogenic food... The kumara created a new economic wealth that provided for larger populations that could remain in one place for longer periods. As a result Tamaki became much more densely populated with every volcanic cone becoming the station for massive storage facilities which of course had to be defended with engineered fortifications. One could say it was the kumara that modified the volcanoes of Tamaki, including Maungawhau. (Pita Turei)

In September 2013 Eden Arts was proud to support the unveiling, by Dame Cath Tizard, of this new public sculpture in the heart of Mt Eden. This is an Auckland Council project with assistance from the Maungawhau Mt Eden Community Arts Trust (Eden Arts) and recognises the significant contribution local artist Peter Lange has made to the artistic life of Mt Eden.

Peter Lange is one of New Zealand's most successful contemporary sculptors. This new work features three super-sized kumara rendered in brick and pipe fragments in the artist's signature playful style. 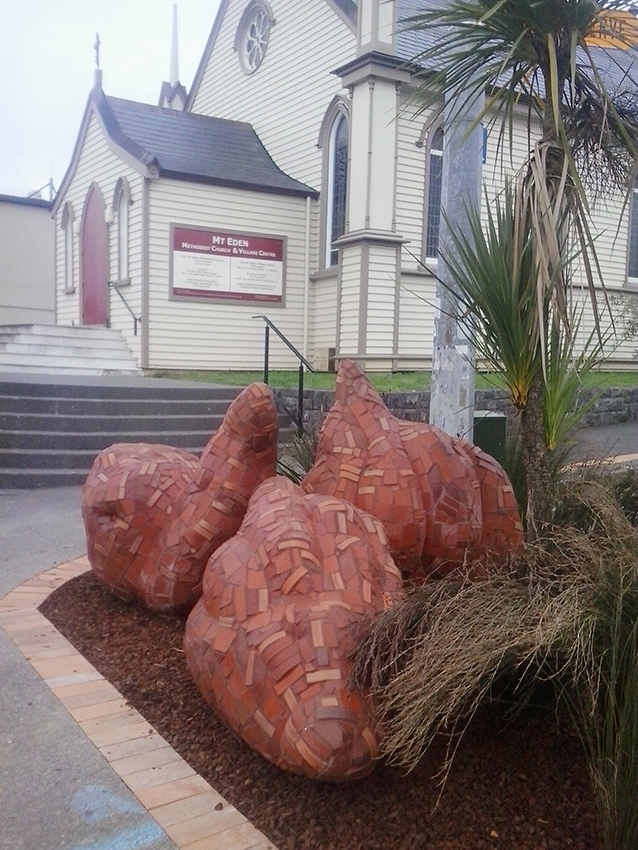 A large "Home of the Arts" sign has hung at the entrance to Mt Eden Village (outside the church on the corner of Valley Rd) for many years, courtesy of Eden Arts volunteers. Eden Arts updated this sign to incorporate an image by the late Sir Peter Siddell as a tribute to his longstanding association with Eden Arts. The new sign was installed in March 2012. 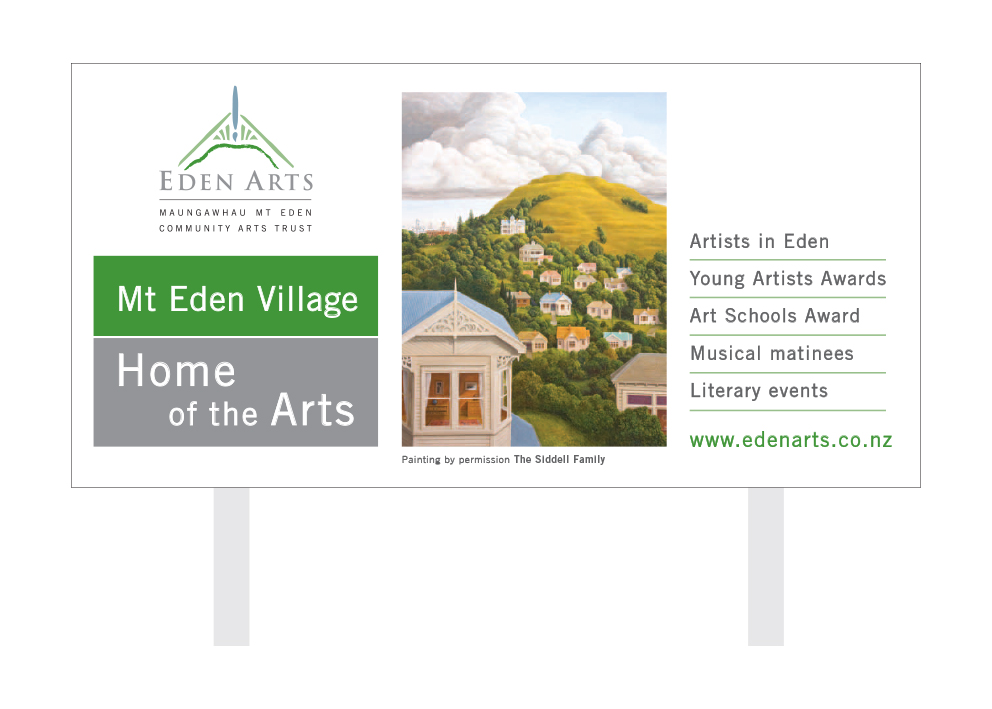 The Peter and Sylvia Siddell Memorial Award was launched by Eden Arts in 2012 in honour of the late Sir Peter and Lady Sylvia Siddell. The Siddells were Mt Eden residents and loyal supporters of the Eden Arts Trust in its foundation years. The award is traditionally presented by daughters Emily and Avril Siddell and the Siddell grandchildren to a young artist of the Board's choice at the Young Artists Awards. 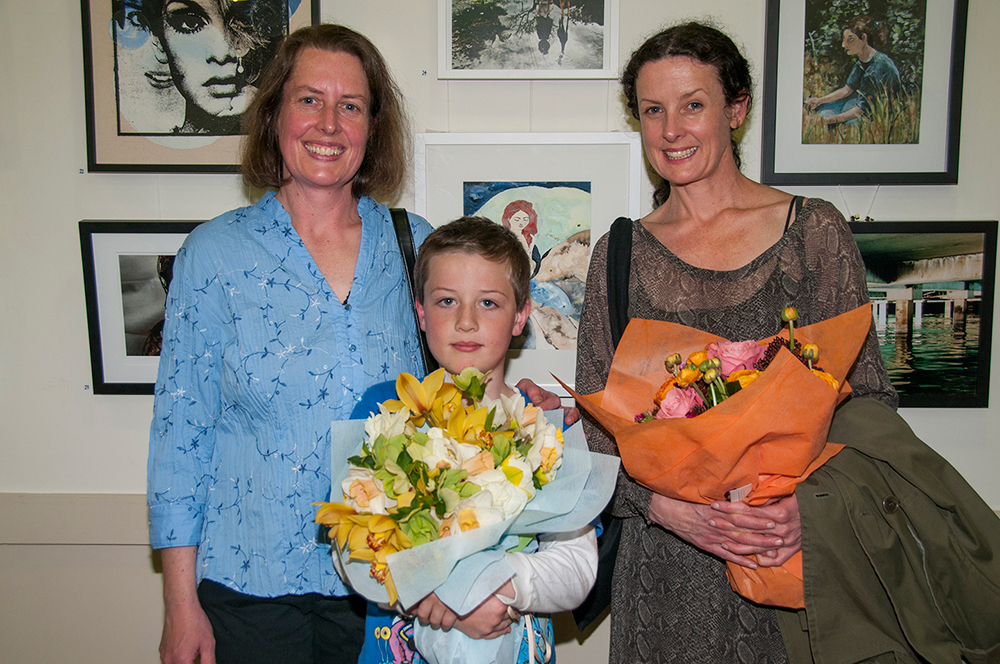 An Eden Arts initiative in June 2010 was the installation of the sculpture Bystanders by Richard Wedekind in Essex Reserve in Mt Eden Village. Made of corten steel, this work was publicly unveiled by the Hon. John Banks, then Mayor of Auckland City. Said the artist "Bystanders is a sculpture comprising three figures. They have a common focus and interest in their immediate environment and the activity surrounding them. This work is about shared community experiences and as such are the quintessential bystanders. I believe this concept reflects the essence and people that is Mt Eden. May this sculpture also become an endearing addition to that and become a familiar focal point to the village."